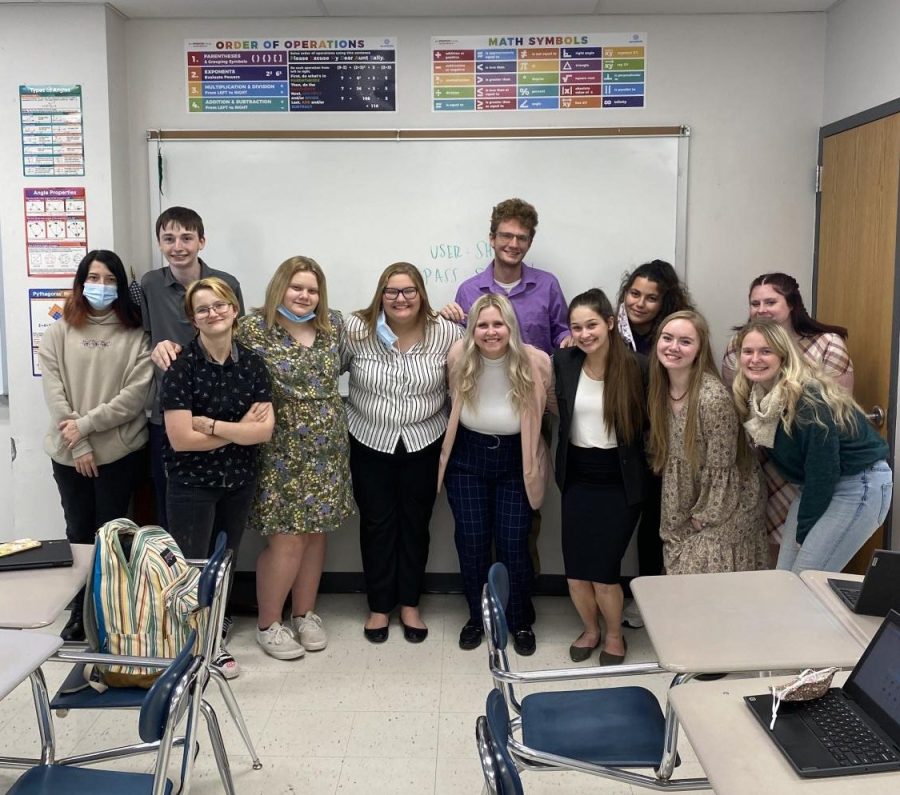 The full speech and debate team preparing to go and compete

Practicing, on the other hand, has been a little difficult for the students and Mrs. Papin. Many of the kids on the speech and debate team are involved with many other things like the upcoming musical. Papin said, “Right now, I have students in my tutoring and that’s where we practice because students that are in finals are usually involved in other activities.  They are either in sports or in the upcoming musical so we aren’t doing a ton of practice right now other than just looking over scripts. As soon as the musical is done we’ll practice more. I was talking to all my students during Trojan time, and they said they are starting to like speech and debate more than all their other activities.”

Mrs Papin is incredibly proud of her finalists and hopes some of them end up moving to districts, which comes after finals. Districts take place on March 4 and 5 at Eldon High School. She said, “They only take top 8 to 12 in the district which is very difficult.” Papin goes on to explain how districts differ from finals. “Districts differ from finals because there is only one student in each category/event,” said Papin.

Papin has to pick one student she thinks best represents our district. Papin said, “I think of Noelle Porter because I asked her to do the most challenging event (humorous interpretation). This is one of the most difficult events to do. I watched her step out of her comfort zone and get 1st and 2st place in her rooms. When I see a student that has that potential and willingness to work hard, I know they will be successful.” Humorous Interpretation is one of the most challenging events to do because you have to be playing one person which includes acting, speaking, and have the humor and keeping up with your time all at the same time.

Papin said,”I’m just so proud of everyone and their hard work. What I think is unique about speech and debate is, we only have little time to represent ourselves and the students can’t make mistakes. Compared to sports, they don’t have as many opportunities to make small mistakes. It’s hard to put it all into words but it’s been a really good year. Just to make it to finals was incredible.”