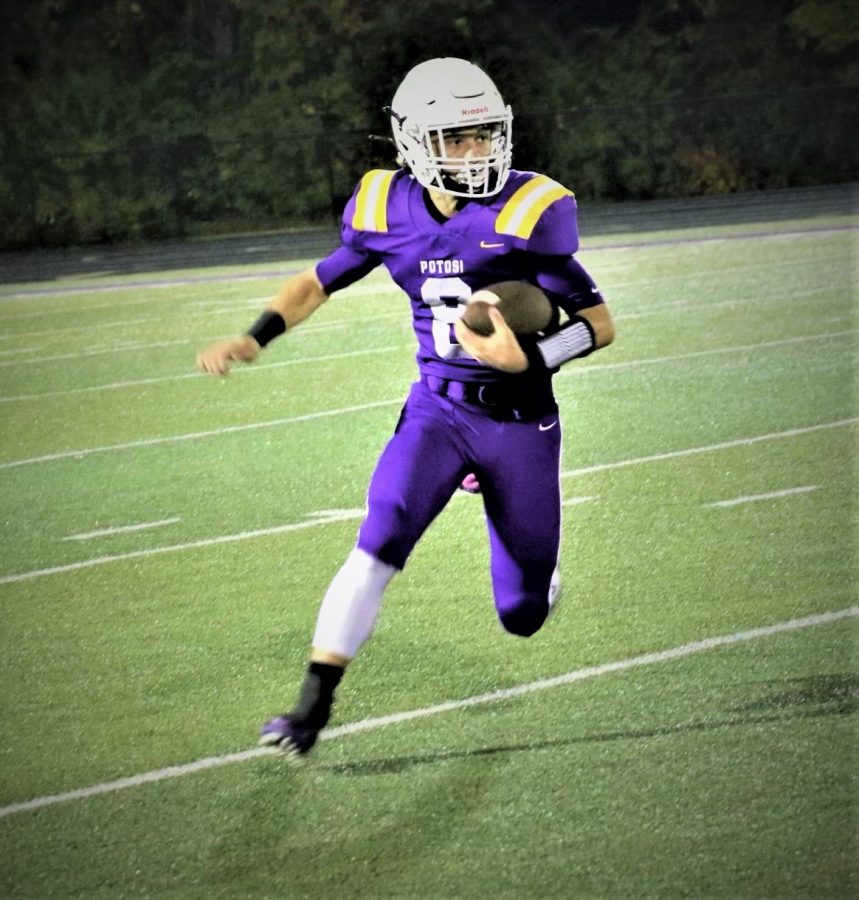 On October 9, PHS varsity football hosted their last home game against the Sikeston Bulldogs until the playoffs. Going into this faceoff, the Bulldogs had a record of 2-4 and the Trojans had a record of 3-3. The Trojans pulled out a win with a score of 39-25.

Before the start of the game, the boys carried American flags as they ran through the banner over to the home sideline. An annual tradition for PHS is to dedicate a home football game to honor the veterans who have served for our country.

“Before the game, I was a little unsure. I was still confident in our team and our abilities, but the factors of having to find a new team on such short notice and having a short time to prepare for them conflicted a little,” said senior Devon Marler. With only minutes winding down until kickoff at 7 p.m., senior captain Brayden Isgriggs took part in the coin toss. The verdict stated that the Trojans would kick to start the game off.

Junior Blake Henson kicked off for the Trojans and the ball was recovered on the Sikeston 19 yard line. A block in the back against the Trojans ended in a five-yard penalty for the Bulldogs’ first possession of the night. Sikeston fumbled the football with 11:45 on the clock and it was recovered by junior Levi Courtney who made it to the Sikeston four-yard line. In just the first possession of the game for the Trojans, senior Wade Mercille ran in for a touchdown making the score 6-0. Henson kicked a field goal for the extra point making the score 7-0.

Henson kicked off again for the Trojans and kicked a deep left kick. The Bulldogs caught Henson’s kick and ran 86 yards into the endzone for a touchdown which made the score 7-7 including the good extra point kick with 11:27 left in the first quarter.

Junior Dylan Thornbrough kicked off for the Bulldogs. The ball was caught by Henson who was tackled on Potosi’s 29-yard line. With a few yards gained here and there, Potosi was able to receive a first down. Senior Amondre McCaul ran for 28 yards to score another touchdown for the Trojans with 7:49 left in the first quarter. Another good kick by Henson gave a lead to the Trojans 14-7. With about 6:40 left in the quarter, the Bulldogs decided to punt. The snap was fumbled and picked up by sophomore Zane West. A two-point conversion was attempted, but it was incomplete and at the end of the first, the score was 20-7. Neither team scored in the second quarter, although Potosi was close to another touchdown when McCaul fumbled the ball with 7:43 left.

To start off the third quarter, Sikeston kicked off deep to the endzone and had the Trojans starting on the Trojan 20 yard line. Potosi’s first possession of the quarter started with Henson receiving a handoff from Coleman and had a run of 12 yards. There was a back to back loss of yardage on Henson and junior Blake Missey’s runs. However, on the third down their luck was turned around by Coleman putting up a screen pass to Henson for a gain of 26 yards. Illegal procedure was called on Potosi for the next down with a loss of five yards with just 9:30 on the clock.

Mercille scored a 17-yard running touchdown and Henson kicked a good extra point with 4:40 left. The score was 27-7. A few minutes later Sikeston scored a touchdown from a handoff to Sikeston’s McClinton and with a good extra point, the score was 27-14 and 1:21 left. The Trojans tried getting through the Sikeston’s defensive line, but they couldn’t penetrate and were forced to have their first and only punt of the night by senior Bryce Reed.

Early in the fourth Sikeston tried to pass to junior CJ Posey, but overshot and was almost intercepted by Henson and was recovered by senior Adrian Smith of Sikeston. The Trojans took a timeout with 10:48 left to recuperate. A pass by Sikeston was knocked down by Knapp and the Bulldogs got close enough for a field goal attempt. The kick was good and the score was 27-17. The Trojans gain a few yards when they get the ball back and another penalty was called for illegal procedure on Potosi. A gain of more yards got them close enough for Henson to score a touchdown with just 5:34 left in the game. His kick was blocked and the score was 33-17.

Sikeston responded with a pass of 35 yards and a touchdown for the Bulldogs along with a good two-point conversion. The score was now 33-25. As the minutes dwindle down, Coleman is able to run into the endzone for a touchdown with just 2:59 on the clock. Henson’s kick was blocked again and the score was 39-25. Sikeston tried to pass after the Trojan’s touchdown and it resulted in a fumble by Lawrence and was picked up by junior Carson Saunders who ended up on Sikeston’s 13-yard line. Coleman fumbled the ball but was recovered by Henson. Until the very end, Sikeston rushed the plays along, but they lost 39-25.

“The offensive line did pretty amazing, but still had a couple of mistakes and still have a lot of things to improve on,” said senior Luis Ortiz. As a whole, the Trojans pulled together as a team to get this win making their record 4-3.

“I’m very proud of the way that the team stayed together and kept swinging the entire game,” said Coach Wyrick.